D. Ray’s Rock Shop is open for business. Rockin’ is our business… and business is good!

D. Ray’s Rock Shop is a perfect combination of real rock and entertaining features to kick off your work day.

Local news, weather updates, and the latest in sports.

Fun features like Alternative Education, This Day in Automotive History, The Anti-Tech Minute, and Whiskey at Work to keep you entertained.

Plus fun contests and ways to win every morning!

Rapid City native D.Ray Knight was a touring stand-up comedian and started working in morning radio in San Diego in 1997.

He returned home to the Black Hills in 1998 to be part of the new morning show team on Hot 93.1 KRCS.  D. Ray left the airwaves in 2006 and moved to New York City to work for ACN, the American Comedy Network. ACN provided short-form audio comedy for approximately 300 radio stations throughout the US and Canada. Starting as a staff writer, D. Ray became the head writer in 2008 and served as the head writer until ACN was shuttered in 2013.

After that, D. Ray returned to the stand up circuit and also landed a couple of acting jobs including a co-star role on “Law and Order SVU”.

In 2016, D Ray received an offer he couldn’t refuse and returned to the airwaves in the Black Hills, joining his old friends with Homeslice Audio. He continues to do stand-up comedy throughout the region.

JAKE MICHAELS rocks your mid-days (10 am to 2 pm) with the WORKDAY REBELLION on the FOX!

Listen to win $20 from Murphy’s Pub/kol/Press Start/the Blind Lion with the Mid-Day Mix-Up at 11:50!

Plus long blocks of your favorite rock to help you through your work day!

Radio veteran Jake Michaels has been on Black Hills airwaves since 1994. (She started on KKMK) Jake is active in art, theater, music, and human rights. She loves camping (restored a 1960 Shasta camper), hiking, taking care of animals, driving motorcycles in the hills, boating, and occasionally some winter stuff. She’s working on starting a theater group. She performs in plays and flash mob groups. Jake recently started belly-dancing with a master instructor because getting up off the couch wasn’t nearly painful enough. Jake speaks fluent cat and parrot. 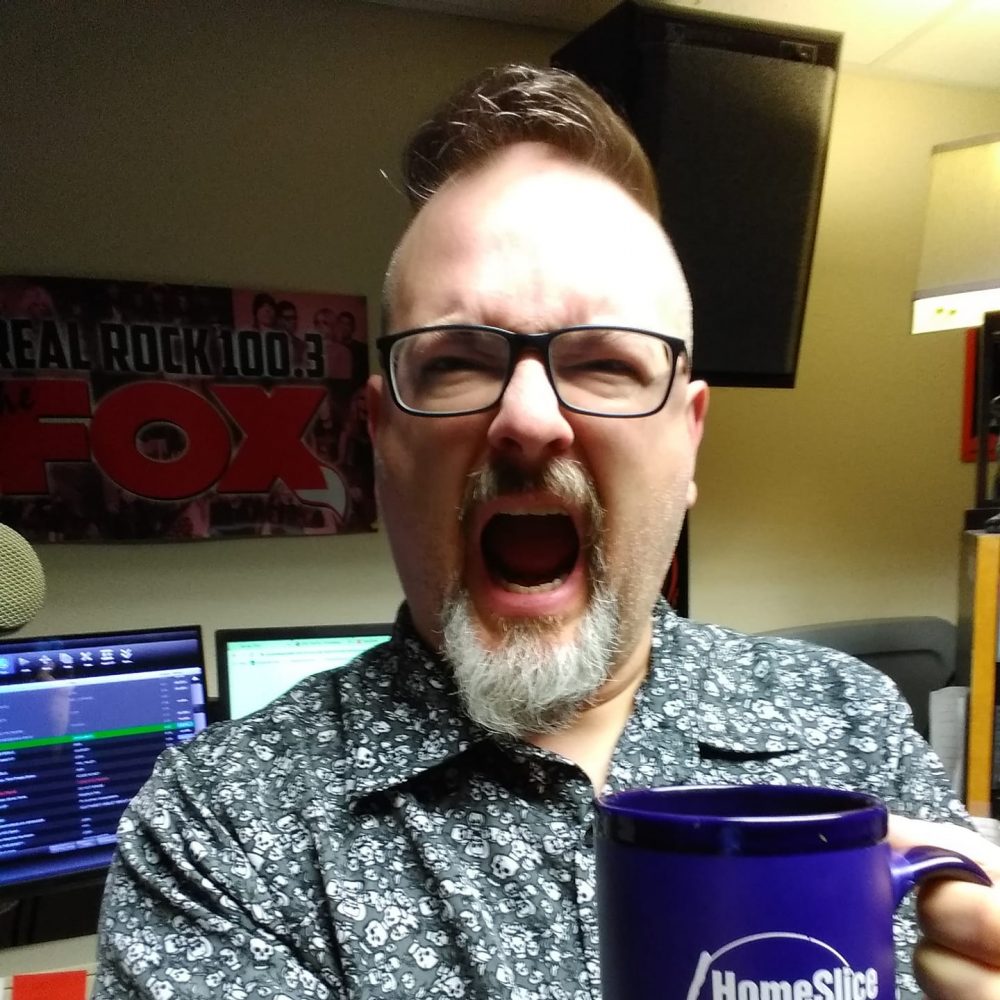 “THE ROCK VAULT with GUNNER”

GUNNER rocks your workday every afternoon from 2 to 7 on Real Rock 100.3 the Fox.

At 3:20, it’s your chance to win $20 in drinks from Cheers Lounge with Everybody Knows Their Name Trivia!

Weird news, cool music features like the House of Hair Cut, Found Sound, and Alternative Education, plus deep cuts from the Rock Vault!

Adrian “Gunner” Ludens has been on Real Rock 100.3 the FOX since 2008. He currently serves as the afternoon host. Gunner is also the program director, and is a content creator for the Homeslice stations.

Using his real name, Adrian is a professionally published author, with over 100 short stories appearing online, in print anthologies, and in magazines. He has several short story collections available for sale.

Adrian is also the public address announcer for the Rapid City Rush hockey team, the AA affiliate of the NHL’s Arizona Coyotes. 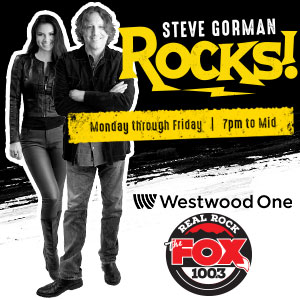 Steve Gorman is a founding member of the iconic American rock n roll band The Black Crowes.
Over 27 years, he toured the world relentlessly, leaving a small piece of his sanity at every stop.
Gorman launched a sports talk radio show in Nashville, ’Steve Gorman SPORTS!’ in 2011,
working with Troy Hanson at 102.5 The Game. The show was syndicated on Fox Sports Radio
from 2014-2018.
Over the last year Steve penned his memoir, “Hard to Handle: The Life And Death of The Black
Crowes,” which will be published by Hachette Book Group this September.
His current band, Trigger Hippy, is releasing an album, “Full Circle and Then Some” this
October.
He lives in Nashville with his wife, Rose Mary, their two kids, and entirely too many pets.

April Rose known in Chicago as ‘The Loop Rock Girl’ from the beloved WLUP 97.9 ‘The Loop’ Chicago’s
Classic Rock is also known from her past work as head ‘On Camera Host’ and content creator for
Maxim.com and Playboy.com.
She’s hosted the infamous MTV Spring Break In Cancun and a season regular on MTV & MTV2’s break
out shows ‘Guy Code’ and ‘Girl Code’. You can see her on many VH1 count down shows including ‘I Love
The 2000’s’, ‘Top 40 Hip-Hop Of The 90’s’, and ‘Top 100 Hottest Rock Stars Of All Time’. Her top pick for
the hottest? You’ll have to ask her!
She owns a 1967 El Camino & loving everything classic she’s also a national live classic car commentator
on The Barrett Jackson collector car auctions.

Saturday morning from 6 to 10 is D. Ray Knight

7 to 9 is Sammy Hagar’s Top Rock Countdown, with a different theme each week

9 to midnight, The House of Hair with Dee Snider. Old school hair metal at its finest!

Then Back to back Fox Rock Blocks from midnight to 8 am.

11 to 3 Mark Douglas brings you the best rock

Then back to back blocks of real rock from 8 to midnight… and beyond!

Jeff Woods will make you want to dim the lights, kick back with a drink, and turn up the stereo during Records & Rockstars!

Each hour features a different theme/focus. You’ll hear some of the best rock ever made, and hear the stories behind the songs.